In my last post, I mentioned how I've been checking out some estate sales and auctions and showed some of the track and field Sportscaster cards I picked up. Today, I'll show you a huge lot of 1990 Collect-a-Books I was able to find at a really decent price.

Each "book" has eight pages and easily fits into a penny sleeve or sheet. The inside pages feature photographs and stats, as well as biographical and personal information about the ballplayer. 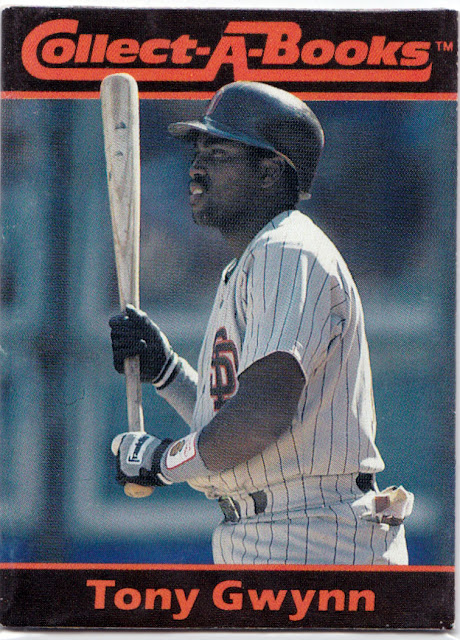 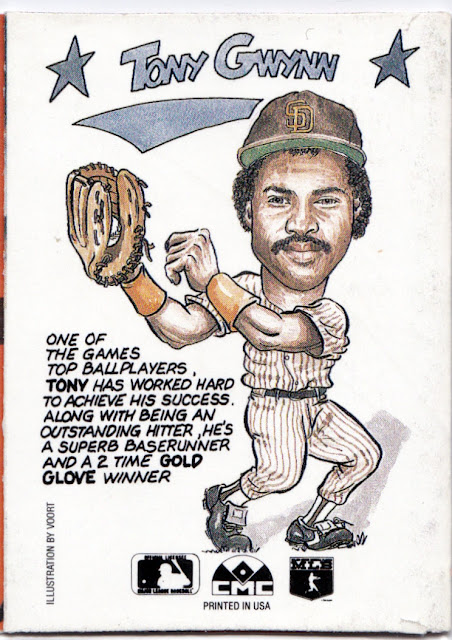 The front has a nice color photo of the player, sandwiched between the "Collect-a-Books" logo at the top and the player's name at the bottom. The back has a caricature of the player, illustrated by Ken Vandervoort, a sports illustrator who drew a syndicated weekly sports feature called "Sports by Voort," and an informational blurb,  just like the back of a baseball card. Players ranged from Bo Jackson, to Ted Williams, to Bob Feller.

The collection I picked up had only 21 of the 36 cards, and there were a few copies, but for the price, I didn't really mind. 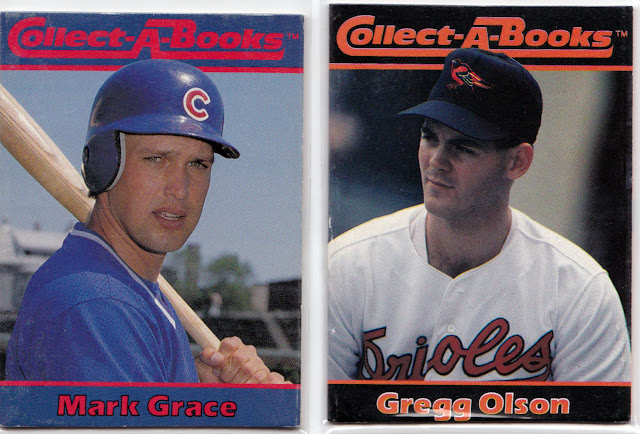 Stay safe and healthy out there.

Estate Sales and Auctions, anyone?

Lately, I've been checking out a few estate sales and auctions, both online and in person. While I have trouble keeping my head above water with some of the sharks that prey on some of the higher end cards you may find at these sales, depending on how they break up collections, I have been able to find enough track and field, Padres and oddball cards to keep me coming back.

For example, during an online auction that piqued my interest last month, I won a bunch of Sportscasters sports cards.

Surely you remember those huge Sportscasters cards - available through subscription only (from 1977-79), with slightly rounded corners and costing less than three dollars for a 24-card pack. Measuring 4-11/16 x 6-1/4 inches, a total of 2,184 different cards were produced for U.S. distribution alone.

These cards are actually printed in Japan and Italy, and have been produced for many other countries and languages. According to the PSA, there are cards in French, Belgian, Italian, Swedish, Finnish, and the United Kingdom. Not sure of your card's country of origin? Sportscaster cards have small numbers printed on the back, for series, country and card number.

Remember when I mentioned there were 2,184 different cards in the American set? Of those, 307 cards featured running-related subjects, ranging from Steve Prefontaine, to the Penn Relays. 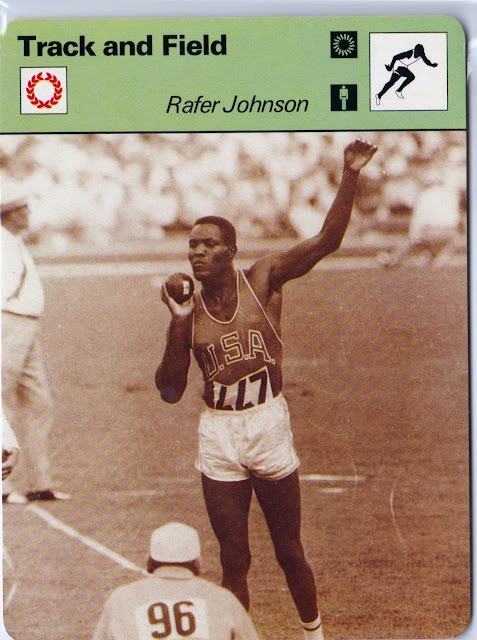 Here's the front of Rafer Johnson's Sportscaster card. Johnson earned a gold medal at the 1960 Rome Olympics, winning the decathlon. He won Silver in the even during the 1956 Olympics. 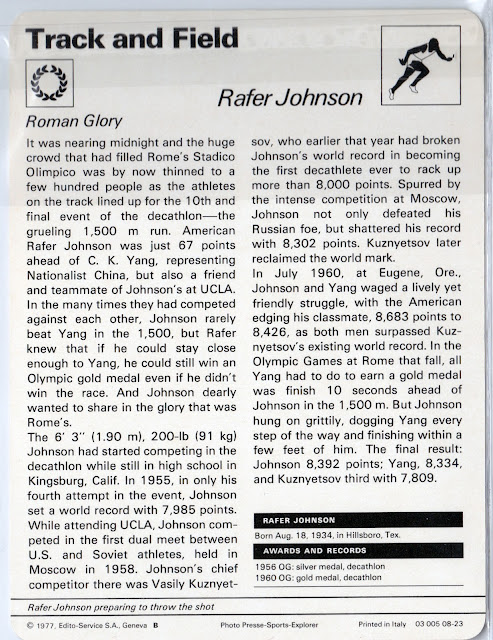 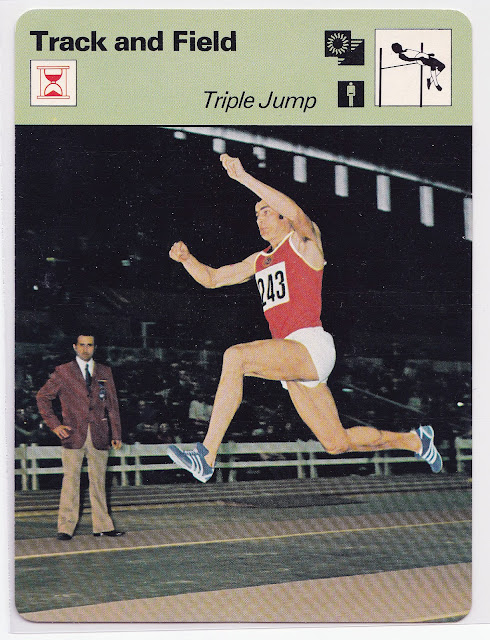 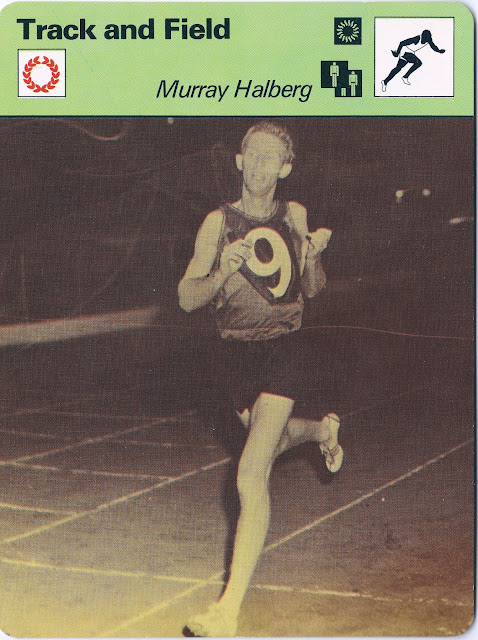 New Zealand middle distance runner Murray Halberg. He won gold in the 5000m at the 1960 Olympcs. 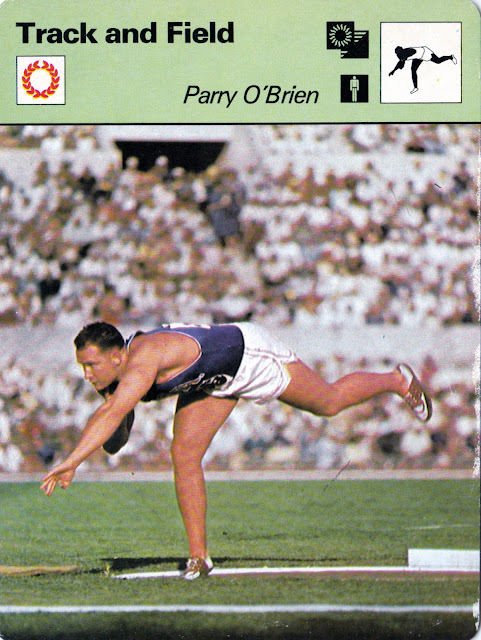 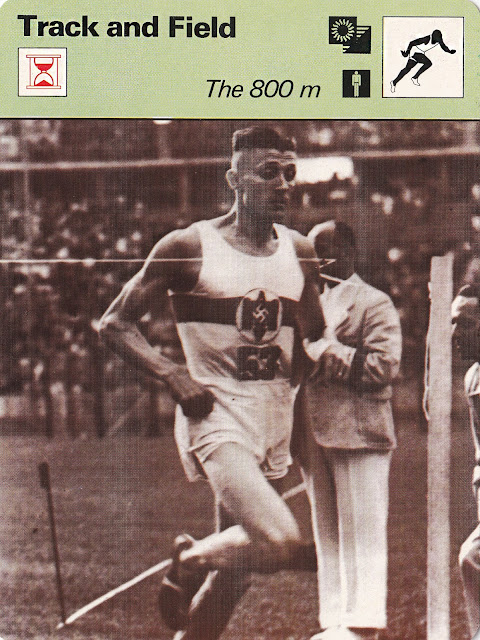 British runner SydneyWooderson. Even though he's pictured here as an 800m runner, he set the world mile record of 4:06.4 in August 1937.

I also was found the perfect storage sleeves for these cards at Michaels, the hobby store. They're labelled Card Storage, from The Paper Studio. They're A7 card storage bags, measuring 5.438 x 7.313 inches. You get 20 to a package, and they're also acid free and archival safe.

And as usual, they're up for grabs. They're all yours if you can send me 2-3 track and field cards (please no Impel, or 2012 & 2016 Topps Olympic Team - I have more than enough), or 2-3 Japanese baseball cards (no American-made Topps or Upper Deck products, please).

Please, stay safe and healthy out there.