It kind of figures...A new year is soon upon us, and I've picked up yet another pair of collecting itches - as if collecting the San Diego Padres, Track & Field, Japanese Baseball and Green Bay Packer (Lombardi-era) cards weren't enough.
No, my friends, my collecting instincts are now leading me in two totally different directions. I think I'll start with the seasonal bug first.
For many years, I've enjoyed being one of Santa's many helpers, visiting with children, determining what they want for Christmas, and ensuring the Magic of Christmas endures. While this was the first year I wasn't actually to portray Santa, I was still able to spread Christmas cheer. 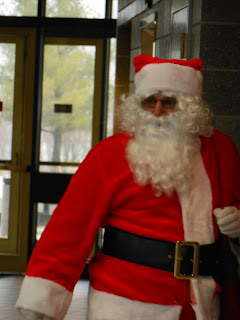 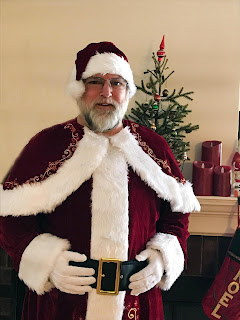 I work as a Recess and Lunch Supervisor at an elementary school in a Des Moines (Iowa) suburb. Our kids are completing on-line education until Jan. 4, when they return to full-time school. As our teachers are still conducting that training from our school, towards the end of the day, I put on the suit on the right (and yes, that's my real beard) and visited each of the teachers in their classroom. Four of the teachers actually called up their husbands to bring their kids to the school, in order to see Santa.
Besides getting photos with them (they were sitting on a bench, as I was standing behind them, and everybody was masked), I was able to talk to the little ones, helping keep Christmas and Santa alive for them in this time of Covid-19.
If you were to see our living room at Christmas, you'd see several Santa figurines displayed around the house, many of them gifts from family and friends. I've even received a pack of the 1994 Santa Around the World Premier Edition Collector Cards.

While I'm not being real aggressive about it, I'm now looking to collect Santa-themed trading cards. I know Pro Set, Collector's Edge, Pacific and even Topps have released Santa-themed cards, so I figured, what the heck, I'll see what I can find. Again, for me, it's all about Christmas magic and Santa Claus.
On the other side of the coin, however, the other specific card collecting I'm now embracing is Sumo. I've enjoyed Ryan's Japanese Sumo Wrestling Cards and Menko blog for some time. While I wrestled "Folkstyle" in high school, I've gotten to enjoy the ceremony, physicality and tactics of Japanese Sumo.
I've actually picked up my first "set" of sorts - a 6-card set of 1986 Sumo Pocket Calendar cards from Portugal. Two of the wrestlers are Konishki and Takan. 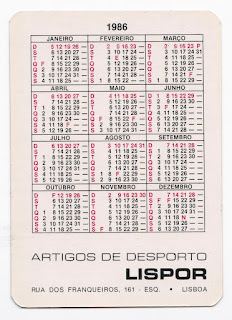 Konishki, a Hawaiian, became the first non-Japanese Ozeki (the second highest Sumo rank), in May 1987. Takan, Sumo's 59th Yokozuna (the highest rank), won four top division tournaments. After retirement, he ran a Sumo training stable until his death in 2011. 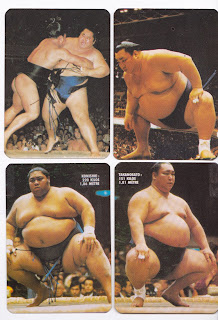 While it's always fun and exciting to begin collecting something new, I guess I'll see where these two new collection interests take me.
Stay safe and healthy out there.