Going through my myriad number of cards the other day raised an interesting question and one that I hadn't really thought much about - What's the oldest card in your card collection?
When you're a fan of a San Diego Padres baseball team that has only been in existence since 1969, along with the Kansas City Royals, Montreal Expos (now the Washington Nationals), and Seattle Pilots (now the Milwaukee Brewers), it's a no-brainer. 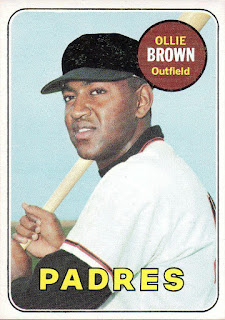 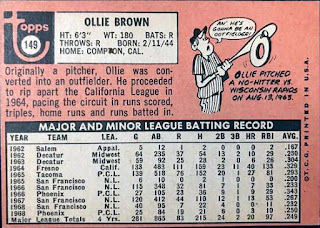 Ollie Brown, the original San Diego Padre, was San Diego's first pick in the 1968 baseball expansion draft.
Brown,  an outfielder who could throw the ball on a rope from far right field to third base, led the Padres in batting average in two of their first three seasons.  He hit .272 as a  Padre, with 20 homers and 208 RBIs in 458 games before being traded to the Oakland A's in May 1972. Brown passed away in April 2015, due to mesothelioma. He was 71 years old.
My other sports passion involves the Green Bay Packers. As a life-long Packers fan, and Lombardi-era aficionado, the oldest Packer card honor is held by Dave "Hawg" Hanner and his 1955 Bowman card (#131). 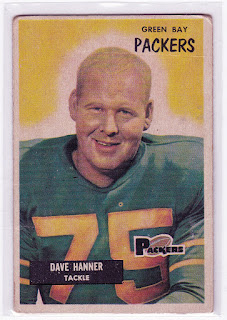 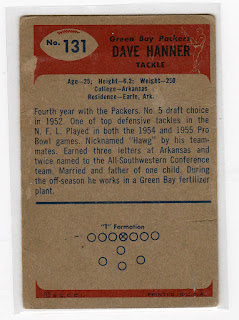 Hanner was the anchor of Green Bay's defensive line for most of his 13 seasons, after being selected in the fifth round (52th overall) of the 1952 draft. He played in 160 (out of 164) regular season games, three of which were missed during his rookie season. He was Green Bay's defensive line coach (1965-71), defensive coordinator (1971-79) and assistant head coach (1975-79). In 2008, he suffered a heart attack, and died two days later.
On the hockey side, my oldest card would be my 1952 Parkhurst Gus "Hardrock" Mortson (#27), a Chicago Blackhawks Defenseman. 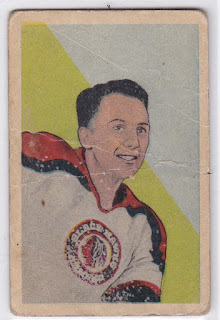 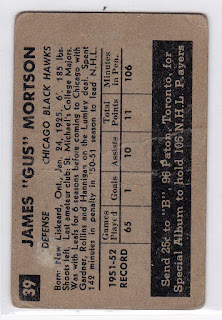 He started out with the Toronto Maple Leafs  in 1946, winning four Stanley Cups, before being traded to the Blackhawks, in a deal that brought Hawks goalie Harry Lumley to Toronto. He retired in 1958-59, after part of a season with the Detroit Red Wings.
When it comes to non-sport, and I'm not entirely sure how I picked it up, would have to be this 1912 Cries of London, "Do You Want Any Matches" (#15) card. Apparently, it was a 25-card cigarette set produced by John Player & Sons, based on a series of oil paintings by Francis Wheatley, depicting real-life  images of street sellers in the late 1700's. 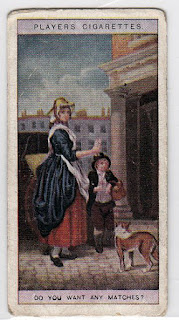 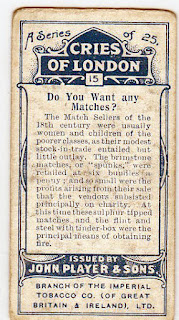 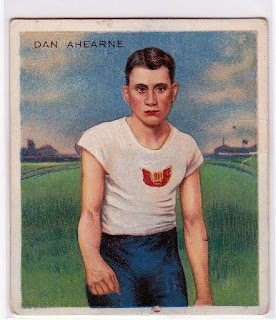 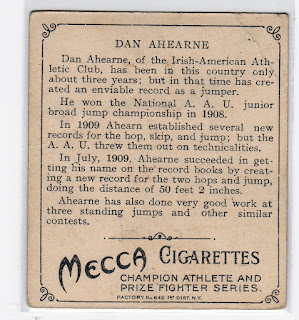 After immigrating from Ireland in 1909, Dan Ahearne (Ahearn after immigrating) was a triple jump specialist, winning eight U.S. AAU titles over nine years and setting a world record in 1909 with a 50-foot, two-inch jump. Dan competed in the 1920 Antwerp Olympics, finishing sixth in the triple jump. He later became a policeman and died Dec. 20, 1942, at the age of 54.
So, now the question is, what are the oldest cards you have in your collection?
Stay safe and healthy out there!
at June 21, 2021