Life on the road

A great California-based blogger, Fuji, of The Chronicles of Fuji recently wrote about how he was considering purchasing a new toy, a 2021 Toyota Supra, his "holy grail" car. He said it's been 13 years since he purchased his last car and there are days when he's pumped and ready to buy it, while other mornings, he wakes up and thinks to himself, "This is a toy I just don't need."

I have to admit, I know exactly what those dark thoughts are swirling through his head, as our season of indecision occurred last February. It all began innocently enough when my wife and I began watching the half-hour show, Going' RV, on the Travel Channel.

According to their website, "Hard-working couples and families decide to ditch ordinary life for an adventure out on the open road. Take the ultimate ride as they go on a shopping trip to find their perfect RV. Whether it's upgrading an existing motor home, or going all out for a new one with all the bells and whistles, find out what happens when daring homeowners trade walls for wheels."

They take a tour through three different campers, whether a mobile home or pull-along, and then make a decision as to which one. They are then shown enjoying their first camping trip in their new rig.

So, last February, we went to a local RV lot to price a Motor Home - we had no intention of purchasing one at that time. Both of our cars would be paid off in June, and that's when we thought we'd maybe purchase a camper.

After looking at a few RVs, we then saw this 28-foot, 2012 Thor Four Winds Siesta. It had been on the lot only a couple of weeks after the owner traded it in for a bigger outfit. Needless to say, it was love at first sight and after a few conflicted hours, we were the proud owners of a used RV, with only 19,200 miles on the odometer. 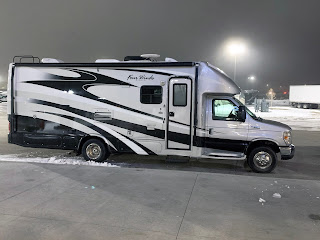 Since mid-April, we'll camp for a couple of weekends, and then take a weekend off. I actually drove it to work on our last day of school. As soon as our last bell rang, I hopped in and drove it to our campsite, where I decompressed for a week, My wife joined me as soon as she was off work. 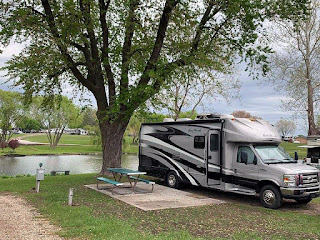 We're basically traveling within the state while we get used to it (my wife isn't ready to get behind the wheel yet). However, we do hope to hit Wisconsin's Door County before school starts in mid-August (I am a Packer fan after all), but we'll have to wait and see.

But perhaps the RV seed was planted even earlier, when I had the opportunity to actually have a beer with Cubs pitcher Rod Beck here in Des Moines. 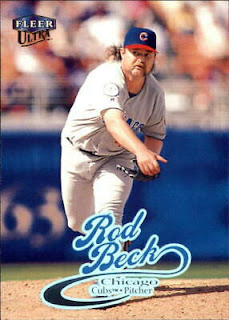 Beck, who was on a rehab assignment in 2003 with the Iowa Cubs after surgery on his right arm, was living in a 36-foot Winnebago right behind the centerfield scoreboard at Sec Taylor Stadium. A buddy and I had heard Beck was living in an RV behind the stadium, so he bet me to get his autograph.

Beck was very personable and even gave us a Coors Light as we talked baseball, his career, and how we was working his way back to the big leagues, while "waiting for the right fit." It was a great night and Beck was a great host and an absolute hoot.

So we now have the opportunity to visit distant sporting events, card shows, and perhaps even meet some of those fellow bloggers whom I've only seen on line, in person.

After all, this is now how we roll.

Stay safe and healthy out there.