Thanks for my first mailed card packet

While I still read the occasional sports card blog posts when I was on my hiatus between Bleedin' Brown and Gold and Comatoad on Cards, I missed the fun little packets that were fouind in the mail from my fellow card-collecting bloggers.

All that changed this past weekend, as I got a nice little envelope in the mail from Mark at The Chronicles of Fuji. I had put up a post about what to do with the leftovers from sets you purchase in order to get the actual cards you need to complete the sets you want.

Since I collect track and field, in this particular case, it was about leftover cards of Olympic athletes. Fuji expressed an interest in a few of the cards, so I put them aside for him. Long story short, I was finally able to get a packet in the mail to him (after a few weeks of procrastination), along with a few other goodies I though he'd enjoy.

And then, he beats me to the punch with a great packet of track and field cards. I knew he was an avid collector of Sports Illustrated for Kids cards, so I really enjoyed receiving these cards, as SI for Kids has a good representation of track field amongst their athlete cards.

1994 Uta Pippig (#300); 2015 Kate Avery (#403); and 2018 Shelby Houlihan (#762). While Pippig was a three-time Boston Marathon winner,  I particularly enjoyed the Houlihan card, as she's a fellow Iowan, who ran out of Sioux City East High School, and then competed at Arizona State as a collegian. Houlihan was named the 2011 Iowa Gatorade Player of the Year, and is the current women's 1500m world record holder, after setting the record at the World Athletics Championships on Oct. 5, 2019. 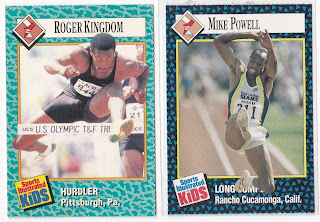 He added a couple more SI for Kids cards with 1989 Roger Kingdom (#53) and 1992 Mike Powell (#1) cards. Kingdom, a two-time Olympic gold medalist in the 110m hurdles (1984/1988) went on to serve with the Arizona Cardinals as an assistant strength and conditioning coach in 2014. Powell is no slouch either, as a two-time World Champion, two-time Olympic Silver Medalist. He also broke Bob Beamon's 23-year old long jump world record, with a leap of 8.95m during the 1991 World Championships in Tokyo.

Next up are a pair of 1992 Impel U.S. Olympicards of Heptathlete Jackie Joyner-Kersee (#88) and Sprinter Michael Johnson (#87); and a 2012 Panini Golden Age Babe Didrikson Zaharias (#50). After watching a 1975 TV movie about Babe Didrikson, Joyner-Kersee decided to compete in the heptathlon and long jump, despite suffering from severe asthma. In 1990, Joyner-Kersee, Sports Illustrated voter her "the greatest female athlete of all-time," just ahead of Didrikson. 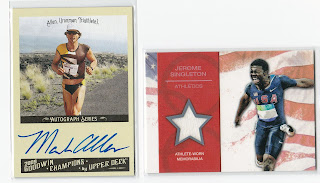 And finally, he threw in an autograph and memorabilia card for good measure. The auto is a 2009 Upper Deck Goodwin Champions Autograph Mark Allen (#MA), and the memorabilia is from a 2012 Topps U.S. Olympic Team Relics Jerome Singleton (#ORJS). While Allen specializes as a Triathlete, Singleton, a three-time Paralympian, competes on both the track (100m, 4x100m Relay) and in the field (Long Jump).

Thank you Fuji for the great cards, and I hope you enjoy the packet I sent your way. I'm definitely looking forward to jumping on the bandwagon and getting cards out to my blogging brethren.