Remember the old Heinz ketchup commercial, with people waiting and waiting and waiting for this thick, red condiment to finally seep out of the top of the bottle, while Carley Simon's "Anticipation," played in the background?
That's how I felt when I finally received a shipment of more than 150 cards from COMC's Redmond, Wash. location.
I continue to pick up the odd bit of change by doing their inventory challenge and purchased numerous cards over the past winter, spring and summer. Since they said there could be delays, I waited until late summer to order the cards, so they would arrive well before the Christmas holidays (or so I thought).
According to COMC, I requested this shipment on August 24, 2020. While it had an estimated shipping date of Nov. 24, 2020, it didn't actually ship until Jan. 10, 2021. I wasn't able to physically hold all these cardboard goodies in my grubby little hands until Jan. 15, 2021.
If you do the math, that's about a half year from when I first requested shipment, until the time I received them. 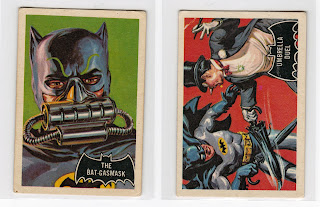 Oh well, enough griping and let's start with some fun stuff. Here's a pair of 1966 Batman Black Bat cards, featuring The Bat-Gasmask (#43) and Umbrella Duel (#23). I still love Batman - my school kids get a kick out of my Batman phone case.

As for my Japanese baseball card collection, these 1993 Kanebo Gold Cards, produced by BBM, are much like the old, raised-surface 3-D, Action-Packed cards. These particular cards feature Tomonori Maeda (#005), Yonetoshi Kawamata (#036), Kaname Yashiki (#006), and Kozo Shoda (#008). 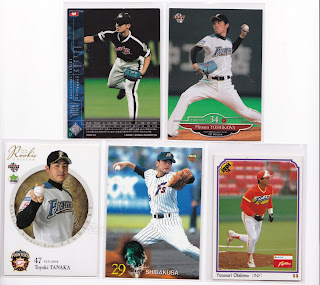 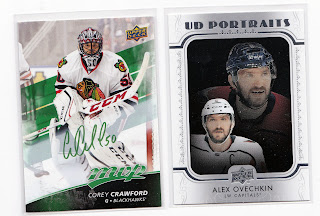 As for hockey, I'm not collecting as much as I used to, but this 2017-18 Upper Deck MVP Green Script Corey Crawford (#40) and 2019-20 Upper Deck UD Portraits Alexander Ovechkin (#P30) particularly called out to me.
And of course, I received a bunch of cards for my track and field collection, but perhaps I'll save those for a later date.
Was this collection worth the wait? Yes and no - I finally received my order, but the anticipation between when I ordered it and when they shipped it was painful. Maybe they should have been a bit more realistic on their estimates, or even used a "TBA" for the shipping date.
In any case, there here, they're mine, they're real and they're fantastic.
Stay safe and healthy out there.